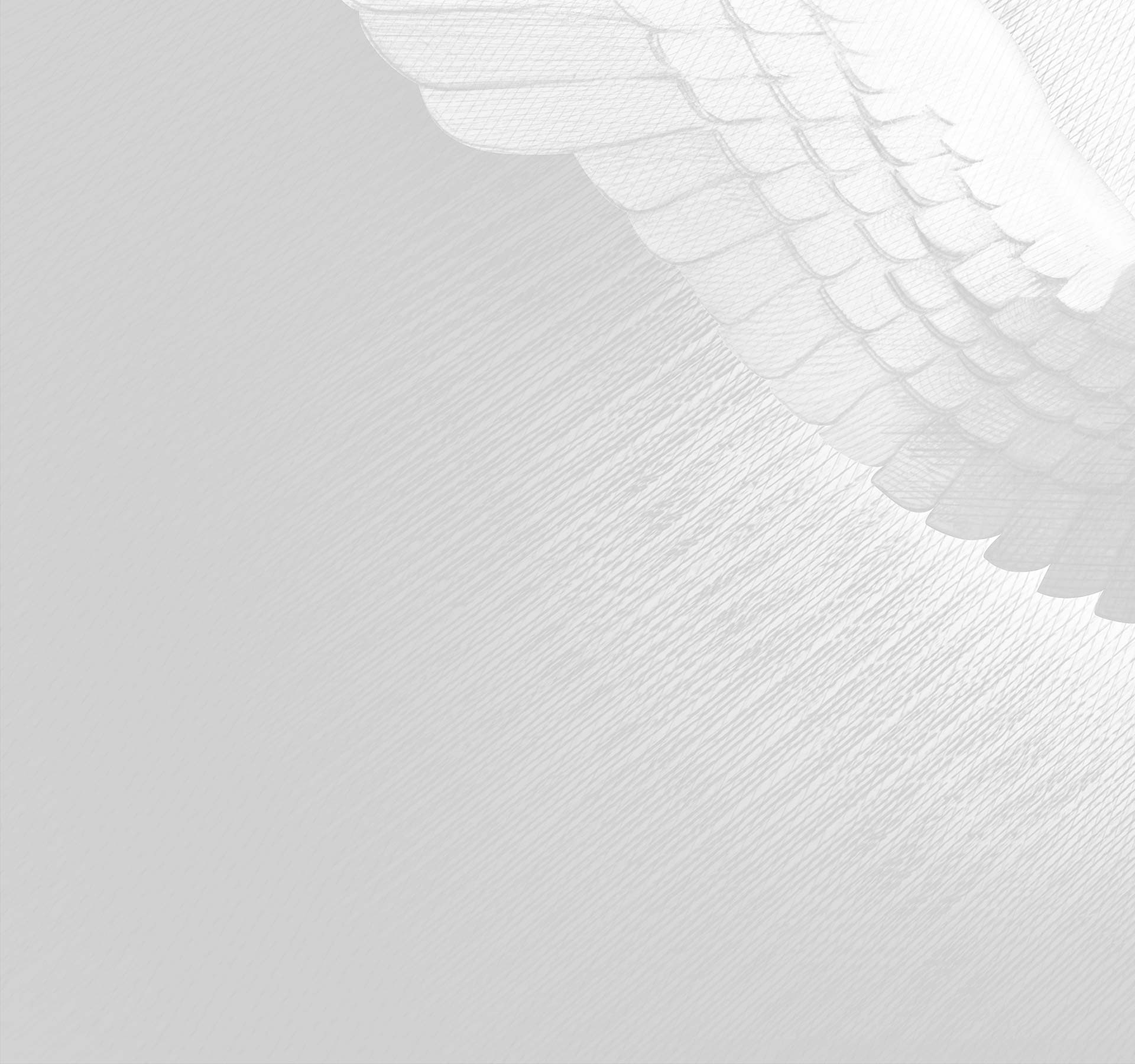 Aleksandra Kinđić was born on 1st July 2002. She is a first-year bachelor student in the class of professor Dragan Lazić at the University of Arts – Faculty of Music in Belgrade. She attended primary and secondary music school Jovan Bandur in Pančevo. During the school year 2018-19 Aleksandra simultaneously attended the International Oboe Academy conducted by Domeniko Orlando in Tissano, Italy.

Being one of the winners of the contest „Young and successful“ she performed as a soloist with the RTS Symphonic orchestra at Kolarac Endowment in Belgrade (2019).

For achieving outstanding results, Aleksandra was awarded by the Fund for Young Talents of Serbia as well as the Youth talent contest of the province Vojvodina.

Marija made her debut with orchestra at the age of nine and has appeared as a soloist with Graz University Orchestra, Camerata Musica Szombately, and Belgrade Youth Philharmonic (with whom she performed at the Tasmajdan Stadion in front of 10 000 people at the event „Night of music“).

Marija is a soloist and concertmaster of „ArtLink Virtuosi“ Chamber Orchestra with whom she had a chance to cooperate with Istvan Vardai, Robert Lakatos, Giorgio Mandolesi.

Ivana Damjanov Ilic was born in Zrenjanin in 1999. As an exceptional talent, she enrolled at the Academy of Arts in Novi Sad in 2016 in the class of Professor Milan Miladinovic, two years ahead of her generation. Due to the excellent artistic results she achieved in her first two years of studies, as an extraordinary talent, the Teaching-scientific Council of the Academy granted her accelerated studies. Ivana completed her Bachelor studies in 2019, in just three years with an average grade of 10. She is currently in Master studies and she is working as a teaching assistant at the Academy of Arts in the subject of piano.

There are over 70 first prizes in her award collection. During her studies, she won 20 International Awards. Some of them are: Sirmium music fest International piano competition 2017, Laureate for all student categories. She was named the best participant in the Junior Academy Eppan 2017 - Music Talent Course in Italy and received an Audience Award; 3rd Malta International Competition 2017; At the 2017 San Dona di Piave Competition in Italy, she won the first prize, the "Con distinzione" special jury award and the audience award at the final Gala Concert of winners of all categories; Stefano Marizza in Trieste, Italy, 3rd prize. She competed in two categories at the Guliano Pecar Competition, where she won the 1st prize and a special jury award as the youngest and most promising finalist; 1st prize Roberto Sellani Milan 2018; Special award from legendary pianist Tamas Vasary for the most promising pianist, Spain Ciudad de Vigo and awards at the sixth and eighth  Isidor Bajic Memorial. She is the recipient of the University of Novi Sad Award for Outstanding Results and Awards for Achievements in Arts Little Prince.

She has performed numerous solo recitals, has performed at major festivals and humanitarian concerts, and has performed with the famous violinist Roman Simovic and cellist Dragan Djordjevic on Kolarac. In the 2018/19 season she made an artistic accomplishment as she played 8 times as a soloist with an orchestra with three different programs on the most important stages in the region: Concert tour (Debrecen, Budapest, Balaton, Ljubljana) as a soloist with the World Youth Orchestra and famous pianist and conductor Tamas Vasari (Liszt: Concerto No.1 in E flat major), then with the Zrenjanin Chamber Orchestra (Timisoara, Zrenjanin, Novi Sad) Mozart's Concerto in A major k.488 and as a soloist with them Symphony Orchestra of the Academy of Arts in Synagogue, Rachmaninoff - Rhapsody on a Theme of Paganini.

She has performed at major cultural centers and halls across Serbia, Romania, Germany, Italy, Malta, Austria, France, Italy, Croatia, Hungary ... She has also recorded for RTV and RTS.

In 2018, she received the award for Best Resital and Best Contestant of the Nei Suoni dei Luoghi Festival in Italy (Udine), and as a prize she received an invitation for a Resital at the elite Trieste 2020 Piano Festival at the famous Verdi Hall. As a result of the previously won awards and performances, she will have numerous international artistic engagements in the coming period.

He has been the first prize winner and laureate of numerous national and international competitions. Follows a list of the prizes won so far:

He performed successfully in Serbia, Russia, Czechia, Italy, Bulgaria, Austria , Belgium , Liechtenstein, Switzerland, Romania and Macedonia. He held recitals and performed at the international festivals “Constantinus” and “Nimus” in Niš, at the National Museum of Liechtenstein, European Music Institute in Vienna, Kolarac Music Gallery in Belgrade, concert halls of the Symphony Orchestra and the Synagogue in Niš, and all other big cities of Serbia.

He held his first concerts with orchestra at the age of 10. As a soloist he has performed in Belgrade (Kolarac Foundation), City hall of Belgrade, Nis, Leskovac...

As a representative of the Ministry of Culture of Serbia, he performed as a soloist with the Presidential Orchestra of Russian Federation under the baton of maestro Anton Orlov, the emeritus artist of Russian Federation in the most prestigious hall of the Grand Kremlin Palace, the St George Hall, on the festival “Melodika Pokoleniy” held on the 31st of May 2015 in Moscow, Russia. Vladimir is the laureate of the “Constantinus” prize for 2012, which is awarded to the most promising musicians under 18 and is the scholar of the Ministry of education of Republic of Serbia . Vladimir has also received the Dositeja award from the Ministry of Youth, as well as an award from the Serbian Academy of Arts and Sciences awarded to the most promising young talents of Serbia for achievements in the field of culture.

Jelena Horvat,was born in 2003 in a family of professional musicians. At the age of 6, she started learning violin in School for Music talents in Ćuprija with professor Dragutin Mladenović.

From the very beginning, this young violinist was performing at the schools concerts, in the most prominent concert halls in the country.

As a soloist, Jelena performed with the orchestra of the school in Romania (Craiova), in Belgrade in the big hall of Kolarac foundation (2012 and 2013), as well as in Monaco, where she performed in front of 800, including the members of the Royal family of Monaco.

At the celebration of 40th anniversary of School for Music talents in December 2013, Jelena performed with the school orchestra in the big concert hall of Kolarac foundation, as well as the soloist at a concert in the National theater in 2014.

For only couple of years playing, she won numerous prizes at both national and international competitions.

After successfully passed audition, Jelena has continued her education from 2015 on "Yehudi Menuhin" school in London, first as the scholarship holder of „Joseph and Drake Calleja“ foundation, and then as the holder of the national scholarship of the United Kingdom.

Jelena is regularly performing at the concerts organized by Menuhin school in both England (Menuhin hall, Wigmor hall) and on the tours abroad in Spain and Switzerland, as a soloist, string quartet member and a chamber orchestra member. 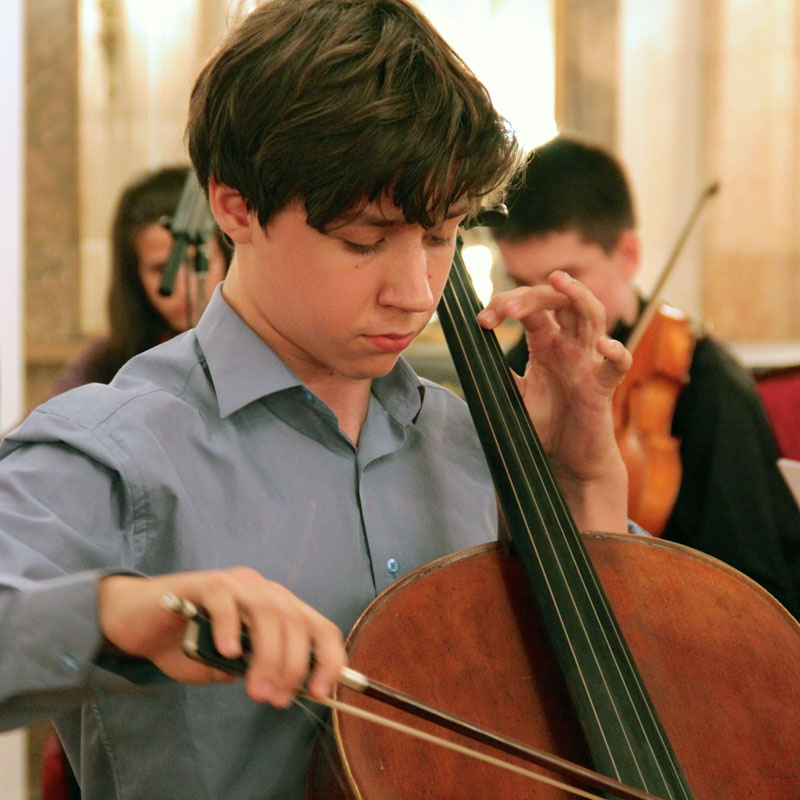 Vuk Ovaskainen was born in Belgrade in 2001 and started playing cello at the age of seven.

He has played 20 recitals in the most important concert halls in Serbia, as well as in Slovenia, Finland and Denmark. He has played as a soloist with orchestras including „Artlink“ Virtuosi and Zemun Chamber Orchestra, as well as chamber music with Stefan Milenković, Magdalena Szczepanowska, Maria Machowska, Pavel Dolezal, Victor-Julien Laferriere, Istvan Vardai, Ognjen Popovic , Giorgio Mandolezi, Tatjana Simonović, Uki Ovaskainen etc.

Vuk is a 4th year student in the mathematical gymnasium in Belgrade, and 2nd year student in the cello class of prof.Sandra Belić at the Faculty of Music in Belgrade. He has received „Stanojlo Rajičić“ award in 2015, for the best recital in the gallery of Serbin Academy for Sciences and Arts, and „Artlink“ award in 2017, as the most perspective young music artist in Serbia.

Ivan Jevtić and Dejan Despić have composed for Vuk works for solo cello. 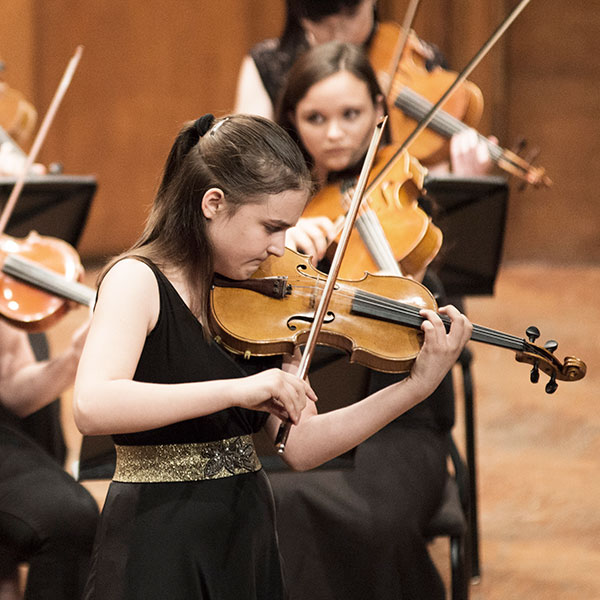 Jana Jakovljević was born in 2005 in Belgrade. She is currently a student at the "Yehudi Menuhin" School in Great Britain/ London, class of professor Lutsia Ibragimova and the proven winner of full scholarship for the school year 2018-2019. Jana finished music School "Petar Konjović" in Belgrade in the class of prof. Dusica Mladenovic and professor Dragutin Mladenovic.

She won numerous awards at domestic and international competitions such as:

She is a member of the Art link organisation and the "Art Link virtuoso" orchestra with whom he regularly performs as a soloist. Jana held several solo concerts from which a concert in the gallery of the Serbian Academy of Sciences and Arts in 2016 is set aside, and a concert in Gstaad (Switzerland) in 2017. She had several performances with orchestras such as: Accademia Archi de Arrigoni orchestra Italy, Art link virtuoso, orchestra of the school for talent from Cuprija, orchestra of Petar Konjovic music school. Jana is also a member of the "Children's Philharmonic Orchestra" with whom she performed numerous performances as a member of the orchestra and as a soloist. 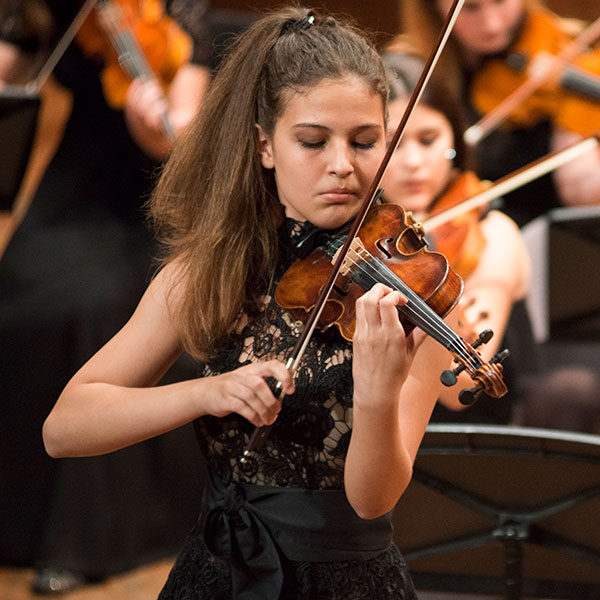 Jana Vukićević was born on 2nd October,2001 in Belgrade. Her musical training started at the age of four, when she became a member and a soloist of the famous children's choir "Kolibri" . She started the violin education at the age of eight and now she is finished Music High School "Dr Vojislav Vučković", Belgrade, Serbia.

Jana participated and won prizes in many competitions, such as:

She was a member of chamber ensembles: 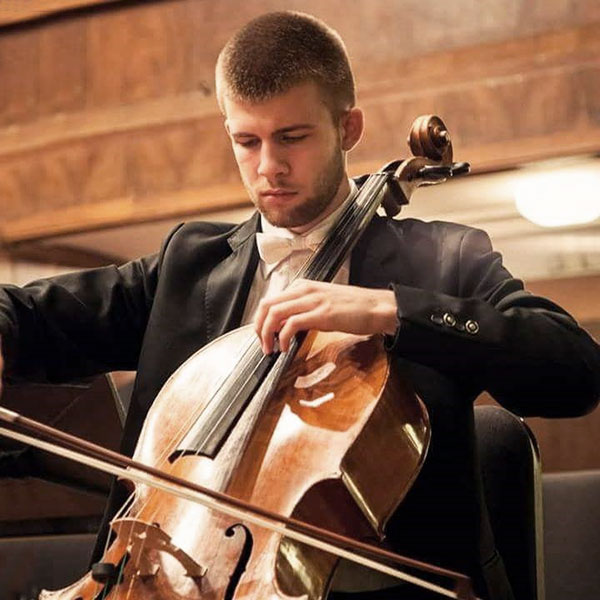 Ognjen Milosavljević (10. 01.1999.) started to play the cello at the music school in his hometown of Cacak (prof. Vesna Marković-Tanasković), and he continues at the School for Music Talents in Cuprija (prof. Nevena Busarac). He started his studies at the Faculty of Music in Belgrade (2016) in the class of prof. Dragan Djordjevic, but after more than a year he has a great chance to study in Freiburg (Germany) and work with world known cellist and professor Jean-Guihen Queyras. From an early age, this promising cellist performes at school concerts as a soloist, he has performed as a member of the string quartet and the leader of the cello section in the orchestra of his high school. He participates in national and international competitions – Republican competiton of students of music and ballet schools of Serbia, International strings competition in Nis (special award), International Competition "Petar Konjović" in Belgrade, Strings festival "Golden Stairs" Valjevo (the winner of category and laureate of discipline), Republican chamber music competition (laureate), “Stringfest” Sremska Mitrovica, Republican orchestra competition, where he has won many awards.

He appeared as a soloist in the great hall of Kolarac in Belgrade with the Chamber Orchestra "Dušan Skovran" and later he participated in the summer camp "Sistema Europe Youth Orchestra" in Milan (2015), where he played at La Scala "Teatro alla Scala" as leader of the cello section in orchestra "Sinfonica Juvenil de Caracas" from Venezuela, under the baton of maestro Dietrich Paredes's. In summer 2016 he received an invitation to play in the Scandinavian Youth Orchestra “Orkester Norden” on tour in Denmark, Sweden and Finland, and later in September he appears in Chicago (Nichols Hall, Evanston) with his string quartet. He also participadet in KotorArt Festival in Montenegro in orchestra of the festival. In October 2018 he gets an opportunity to play along with his professor Jean-Guihen Queyras at the Cello Biennale Festival in Amsterdam, and also to play on the masterclass with outstanding cellist Kian Soltani.